Arriving at LAX yesterday, I was handed the keys to a bland 2011 Chevy Impala, a not-Jetta automobile that is apparently the most common car on the road in Southern California. However, it’s also the getaway vehicle for a fantastic opening scene in the movie Drive, so by now I’m feeling pretty damn fly behind the wheel….. 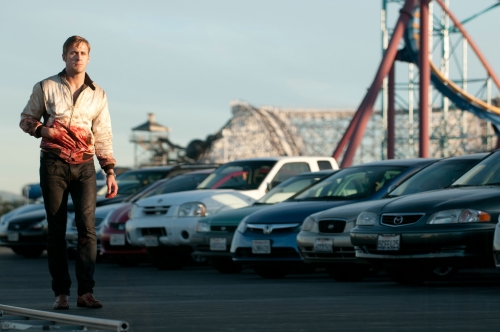 Because Drive is a really beautiful, thoughtfully-crafted-made movie, an action film that focuses on character rather than SFX, complex human relationships rather than shoot-em-up stunts. It stars Mousketeer Ryan Gosling as an enigmatic Hollywood stunt car driver who moonlights as an icy-cool getaway driver. A man without a name or a history, he begins a tentative relationship with a sweet neighbour – the lovely, always sympathetic Carey Mulligan – but is drawn into a fateful “one last job”.

It’s a methodical Film Noir – the kind of film we could’ve expected had Hollywood been colonized by Scandinavians – that’s nonetheless firmly placed in and bleached out by the California sun. It has a fantastic supporting cast too – Albert Brooks is standout playing against type. The LA Times has a great story on the actual locations, so I’ll just leave it at that.

One Reply to “Drive”