I’ll start right out by saying that He’s Just Not That Into You is set in Baltimore, and that’s perhaps the most interesting thing about it. A wry-ish look at the pitfalls and pratfalls of dating amongst an extended Chinese Whisper of friends and acquaintances, He’s Just was clearly conceived as some modern When Harry Met Sally – complete with mockumentary vignettes from completely unrelated people. Unfortunately it fails.

He’s Just Not Into You stars just about everybody except Cameron Diaz, but only Jennifer Aniston and that spunky little Irish-looking guy from Entourage come across as even vaguely authentic. I remember there was a lot said in the blogosphere about the heinous portrayal of the male gay best friends in the film but I didn’t find it at all troubling given that EVERYONE is a Twitter Update rather than a fully formed character. I’m not saying it’s not amusing. It’s just that there’s really nothing to work with, and nothing to hang the humour on except some really rather sorry social pathologies. I guess, I really just wasn’t into it.

And again smokin’ Bradley Cooper as an adulterer; I shall clearly have to have words.

On Christmas night, once the hoardes of revellers had left and we’d got about a third of the way through the cleaning, we all collapsed on the couch for Hairspray. Not the icky 1988 John Waters opus, but the magnificent, ebullient, entertaining 2007 one, most famous, perhaps for John Travolta in drag. 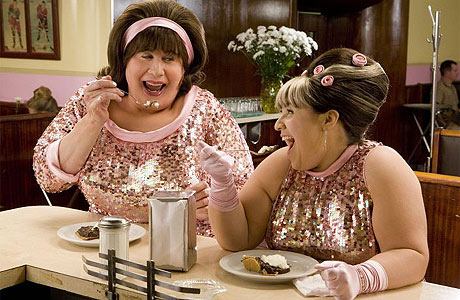 Featuring a truly tremendous cast that simply doesn’t put a well choreographed foot out of place, the movie charts fat girl Tracey Turnblad’s unfolding desire to appear on a Baltimore tv dance show AND to win the guy – Zac Efron – neither of which seem that realistic, to be honest, at the start of the movie. But that doesn’t factor in Tracey’s overwhelming cheerful sweetness – a star turn from newcomer Nikki Blonsky – whose joie de vivre is infectious. Throw in a Civil Rights sub-plot that slowly becomes the plot, remarkable routines (some of it real 60’s dances – how funny!) and some truly brilliant throw-away comedy, and you’ve got yourself a really entertaining movie. The fact that it also shows up the alleged innocence of the fifties as a vicious, ignorant, bigoted and actually unlamented era is also a bonus.

Hairspray is explicitly set in Baltimore, Maryland, but the 2007 film was shot primarily in Toronto because the city was better equipped with the sound stages necessary to film a musical. One thing that caught my attention when originally watching the EPK was the requirement for spongy floors to assist the dancers – something that couldn’t be acheived on Baltimore tarmac, I’m guessing.