From the reviews, and all the Facebook feedback, I’d been really looking forward to seeing Beasts of The Southern Wild, with expectations that it would make for some breath-taking, whimsical, challenging, magic-realistic cinema. 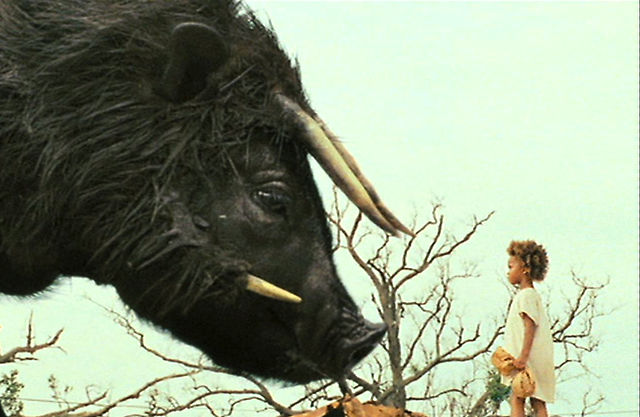 First, the business end of the post, beginning with the plot. Well, there isn’t one really. A child is being raised by her sick single father in a poor bayou community that’s inundated by a levee-breaking storm. The waters rise and recede, the poor continue a life that’s “other”. Some big pigs appear. And that’s about it. Then there’s the locations: the fictional island of the Bathtub (or “Isle de Charles Doucet”) is a creative amalgam of several isolated, independent and threatened fishing communities in Lousiana’s Terrebonne Parish, though it was actually filmed in the Terrebonne Parish town Montegut. And then the star: Quvenzhane Wallis, aged 7 at the time of filming, is so astoundingly – and I mean jaw-droppingly – good, that it’s actually hard to believe she’s acting. She’s fantastic.

Which brings me to the big question: why did I find it so….bemusing, and ultimately unsatisfying? Well, maybe (I’m not an Earthdance/AfrikaBurn kind of guy), the freedom that comes with living on the edge isn’t that attractive to me, particularly if it means rolling around in my own detritus? Maybe too, all that poverty and junk and mud (a short hop from the townships) is all a bit too close to home? It’s hard to suspend belief when you know there are thousands living like that just around the corner. Maybe I just don’t like pushy kids (and the downside of Quevenzhane’s stand-out performance is that you end up dismissing it as “not acting.”) I just didn’t see much “joy” in the film, anywhere. Anyway, I feel like I’m letting the side down really, but I didn’t love this at all. Sorry.