Without giving too much of the plot away, in Salt, Angelina plays a CIA agent who’s accused of being a Russian sleeper-spy and is forced to go on the run both to clear her name and to save her husband. It’s a serviceable little Philip Noyce thriller, not No Way Out – i.m.h.o one of the best movies of the 80s, yes even with Kevin Costner – or even Little Nikita. Think Paris Hilton meets MacGyver, and you’ve got the general gist. It’s kind of how we imagined the secret life of Anna Chapman before her monumental and laughable ineptitude was revealed. Anyway. It’s all fun enough. 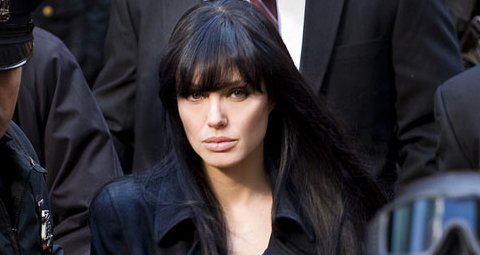 So I guess it all boils down to whether or not you “get” Angelina – and, admittedly, I don’t. At all. Salt feels like the conjured, self-aware performance of someone of average talent who has made a pact with the Darkness in return for the fulfillment of her raging ambition. I am quite convinced in fact, that she sleeps in a coffin lined with pelts stripped from living Amur Leopards and I fear she dines by night on the blood and organs of orphans and street kids and other hapless-innocents-who-won’t-be-missed. I am also convinced we will never see her age, or even die, in our lifetime….

So that’s the bad. On the good side, there’s an awful lot of location filming both in New York and DC. Memorable ones include the L’Enfant Plaza in DC (which looks like something out of Caprica in Battlestar Galactica, frankly), St. Barts Church in midtown Manhattan for the funeral of the Vice President (The NYPD’s Pipes & Drums of the Emerald Society play themselves here). And also Floyd Bennett Field, a disused aerodrome in Brooklyn, which does stand-in as the DMZ between North and South Korea, and is thus kitted with barricades, fences, and Korean signage