We Need To Talk About Kevin is a disturbing and uncomfortable film; it focuses on the closed-down life of Eva Katchadourian (Tilda Swinton), a woman who’s living in a horrified, shell-shocked limbo (“coming to terms” doesn’t even begin to come close) in the aftermath of a Columbine-esque school massacre that’s been perpetrated by her son. Kevin Katchadourian, the title character, has – as we learn in flashback – always been a horrible child, manipulative, precocious, cruel and hurtful. His Dad is in denial about it, his Mom is increasingly perplexed, frustrated and horrified – particularly since Kevin becomes more vicious, calculating and dangerous as time goes on. I hate the word “Evil”, it has such ridiculous religious connotations. But Kevin in evil, and Eva blames herself. 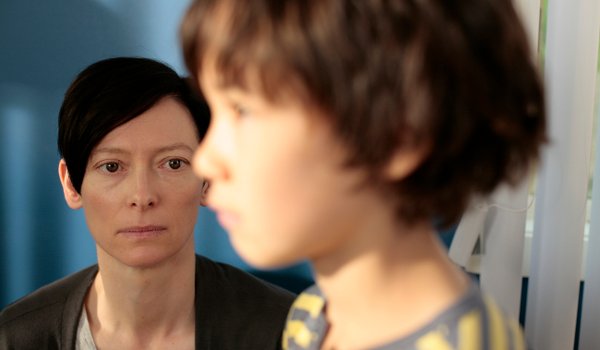 “Kevin” filmed in Connecticut – in Norwalk (I visited Elyse there last summer) and Stanford, which was interesting. But mostly I wondered whether Tilda Swinton is just the best actress on the planet. If you saw her brittle, callow performance as the lawyer in Michael Clayton, she ups it here, and knocks it into orbit. Impressive.

In Revolutionary Road, the lovers of Titanic grow up and settle in the suburban precursor to American Beauty. It’s all picket fences, and grey commutes and cigarettes and martinis and shagging the secretary / next-door-neighbour. Prison with tupperware and a manicured lawn.

April (Winslow) – not exactly altruistically – imagines getting out and running away to France. But Hubby Frank (diCaprio) gets a promotion and April falls pregnant, which completely scuppers the idealistic plans. And then comes a small scene when an acquaintance’s son comes for lunch. He’s on home leave from a mental institution, and we discover his real handicap is telling the truth. With merciless cruelty, he chops through the Wheeler’s facade and mocks their delusions. It’s a wrecking ball to their fragile marriage.

I found Revolutionary Road painful to watch. I’ve spent too much of my own life wishing I was somewhere else entirely (mentally pulling an Edvard Munch) not to identify with the protagonists. For what it’s worth, the movie shot in wealthy Connecticut, in the dormitory suburb of Darien – a town where the median property price is now a million dollars, where blacks and Jews were once notoriously excluded.  There are other links and pictures and maps from the film at the Filmmaps site, and there’s a nice insider take on being in the running to be “that house” at Matrix Real Estate.