The Hunger Games – the gazillion dollar box office success story – is set in a dystopian future where an uneasy peace is enforced nearly a century after a brutal civil war in North America. As penance for their part in the uprising against the central power, the districts outlying the Capitol are forced once a year to send two teenagers – one boy, one girl – to a stage-managed arena, where they are forced to battle it out to the death with 22 other unfortunates while the crowds watch it all play out on tv. However, for the 74th Hunger Games, the Capitol makes the big mistake of picking prickly Katniss Everdeen – no slouch with a bow – as the female tribute from District 12, and the kind, clever Peeta Mellark, who’s in love with Katniss and will do anything to protect her, as the male tribute….. 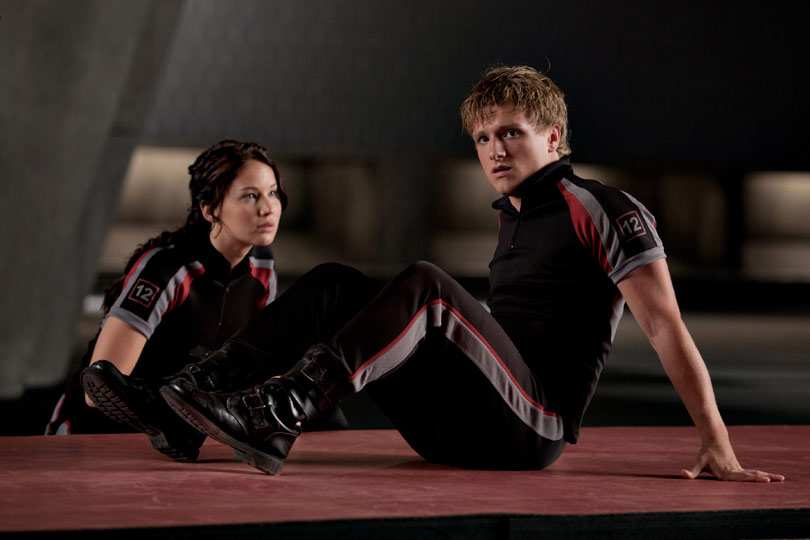 I won’t add more except to say, go see it, absolutely. Read the book too, which is actually pretty damn good; Katniss is as conflicted a heroine as you’ll come across, and Peeta is the kind of charismatic kid I’d have totally been in love with as a thirteen year old. So here’s my easy answer: I completely loved the movie, the casting was spot on, it stuck closely to the book and was evocative, and moving, and thrilling all in the right places.

Hunger Games filmed in North Carolina. Henry River Mill Village, an abandoned ghost town just outside of Hildebran, (about one hour’s drive east of Asheville on I-40) plays the beaten-down mining town of Katniss and Peeta’s home (great depression-era styling there). This whole location is currently for sale by the owner for a cool $1.4 million – which, given the interest in the film and books, and the tourism potential, would completely be a steal. Other movie locations included DuPont State Forest and Pisgah National Forest, Charlotte’s Knight Theatre and the former Phillip Morris Plant in Concord. Part 2 in the Hunger Games trilogy – Catching Fire – starts filming in August.

After the runaway train drama Unstoppable, it’s back to Pittsburgh for me, for the latest Russell Crowe vehicle, The Next Three Days. Chopsy old Russ plays a dowdy, lumpy lit professor at a community college whose firecracker wife (Elizabeth Banks! Love!) is thrown in jail for a murder she may or may not have committed, and who has by now exhausted all chance of appeal. The prof, increasingly rumpled and downtrodden by his experience, realises that he has no choice but to break her out of prison and spend the rest of their lives on the run. The remainder of the movie thus follows a somewhat plodding chart as he delves into the criminal underworld to acquire the tools for the breakout – becoming en route something of the person he would never want to be – and ultimately springs his beloved from the clinker.

As I said, the main location is Pittsburgh – a startling 382 scenes were filmed in the city, and the action and even the characters are kind of steeped in Steeler lore. Unsurprisingly for a jailbreak feature, a large portion of the movie takes place in the city’s Allegheny County Jail – something that required “months of conversations and weeks of preparations” to pull off.

But is it a good film? Yes, undoubtably, but not, I’m sad to say, a really great one: it’s well cast, well written, well acted and is beautifully realised in a grainy, bleached, grim kind of way. But as thrillers go, it really only heats up to reflect the action-packed trailer towards the end of the second hour. That’s a little too long to wait.

Oh oh oh: I really heart Elizabeth Banks. She should be a mega-star by now. And though I admit to being much less fond of Mr. Crowe, I do like his (recent, less self-indulgent) choice of films. And this latest – The Next Three Days – looks ten-points-you-win-the-Opel-Monza.

Zack and Miri filmed in Pittsburgh during the winter and the only thing you can really say about that is: dammit, why the hell hasn’t everyone moved to Florida? There are numerous cultural references to Pittsburgh and the neighborhood of Monroeville throughout the film – including a drunken Steelers fan, a Penguins Stanley Cup flag and Iron City beer.  One scene in the film was shot at the Monroeville Mall – which itself was the setting of the original “Dawn of the Dead”.

One other thing: the role of Miri was apparently written for Rosario Dawson. Say wha??? Though Ms Dawson indeed rocks, Elizabeth Banks completely owns this part.