I finally saw Never Let Me Go last night. To be honest, I’d been avoiding it; I don’t do mawkish well, and the tale of some sappy kids who are bred to have their organs harvested but fall in love instead is not exactly my kind of sci-fi movie. Literary philistine that I am, I’ve never read Kazuo Ishiguro on whose book this film was based. I’m not sure I will either, if this is anything to go by. He has such a stilted, miserly, cruel, stiltified view of England and the English – it’s England filtered through a strange, alien and entirely foreign light. Anyway, as for the film; I liked the “altered reality” 70s setting, the movie’s beautiful to look at and Carey Mulligan is terrific, (not fond of Keira). But it’s somehow not as devastating as it probably should be, given the abject misery of the subject matter. 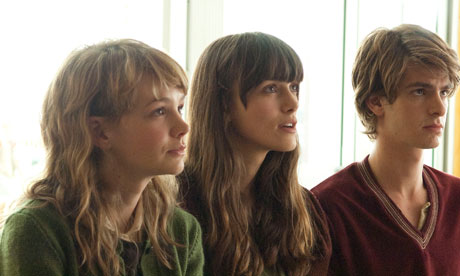 Lots of lovely locations though. The Hailsham School that’s the backdrop for a good first half of the film is actually Ham House in Richmond, and other scenes flit across Blighty, from Scotland to Somerset, to Bexhill on Sea. My favourite scene though is the trio’s reunion on a Norfolk beach – Holkham – where I used to ride my horse as a kid. This is the beach that Gwyneth emerged onto in Shakespeare in Love, so it’s got some cinematic chops of its own.