Agatha returns to Los Angeles from the Florida clinic where she’s been incarcerated following an incident of arson. She takes a job as Personal Assistant to Julianne Moore’s Havana, a self-absorbed narcissistic Hollywood nutcase, whose apparently-abusive mother died in a suspicious fire. Agatha’s brother is himself a child star with issues, her estranged dad is a pat and smarmy Hollywood tv counsellor, her Mom is her brother’s manager as well as her dad’s sister, they’re all grasping and mean and awful and depressing….. Ah, family dysfunction. In the hands of David Cronenburg, it’s all particularly grim and yucky. A perfect patina of Hollywood glamour, slipping along on that mirrored surface and cutting yourself on the edges. It made me feel a bit too icky to actually enjoy it. Julianne Moore may be Oscar nominated though.

Poor Liam Neeson. With his travel luck, he should probably never leave home. After Paris, that thing in Berlin, Istanbul – oh and that flight from Alaska too – he’s now an air marshall on a flight from New York to London that’s in the process of being hijacked by a dastardly criminal who sends him text messages. So, doubted and thwarted on all sides, our Lee charges about the plane, socking passengers in the chops and generally taking names and kicking ass, until such time as he determines who exactly the bad guy is. It’s all faintly ridiculous – not least because Lady Mary is working the aisles alongside Patsy the slave, and that bloke from Law and Order is actually flying the plane. But you know what? The quality of the supporting cast means they’re all suspects (Julianne Moore in a bit part? Rocking!), the action bundles along at such a pace that you’re not at all bothered by the incoherence, and Liam Neeson is Liam Neeson. Don’t expect Oscars, but do enjoy the ride.

Just out of curiosity, we watched both Carrie movies, back to back. The first one has stood the test of time pretty well actually; Sissy Spacek is completely lovely and sympathetic and sweet, her mom is a nutter of the nth degree, and Nancy Allen as the bully is a complete cow. In comparison, the new Carrie – in spite of Julianne Moore’s mom getting a little more backstory – feels a bit unnecessary. Until you get to the Prom scene at the end, that is, when modern FX and the impressive Chloe Moretz both move into an upper gear that is both satisfying and spooky. Carrie 2 filmed in Toronto, but that’s sort of irrelevant.

Crazy Stupid Love takes no time with set up, it goes straight for the sucker-punch. Steve Carrell plays Cal, a middle-aged Dad whose life falls apart quite spectacularly when his wife asks for a divorce. He’s jarred from his melancholia by the friendship of a handsome young player called Jacob (a pitch-perfect turn by Ryan Gosling) who recognizes something of his late Dad in the bumbling Cal. And thus Jacob re-styles Cal, teaches him the finer points of dating, and sends him out into the world. He’s only side-tracked from this Samaritan’s mission by the arrival in his own life of the delightful, charming fire-cracker Hannah (Emma Stone – let’s hear it for Emma Stone!) who turns his own world upside down. Throw in a love-sick baby sitter, a couple of scenes with Marisa Tomei, a brilliant Asian sidekick with nowhere near enough screen time, a bit of Josh Groban, crackling chemistry, great pacing and a really funny script, and you’ve got what’s actually a pretty delightful grown-up rom-com. 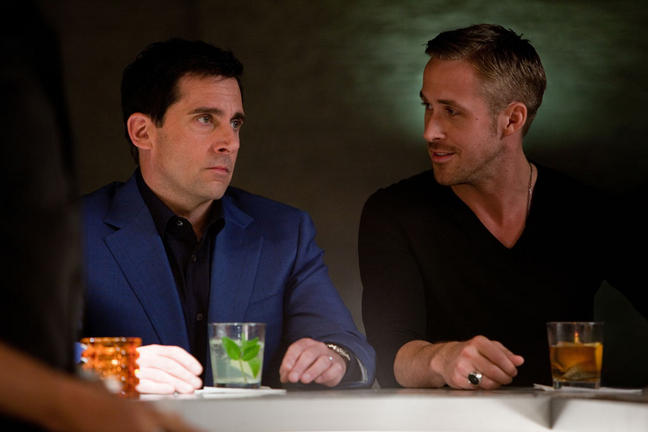 It also filmed in LA – I recognized several of the stores and walkways at the Westfield Century City Mall, where Jacob takes Cal shopping (Jacob: “Are you the billionaire owner of Apple Computers?” Cal: “No”. Jacob: “Oh, ok. In that case, you’ve got no right to wear New Balance sneakers, ever.”) Westfield is very pro-film, and sponsored one of the strands at the Produced By Conference last year. 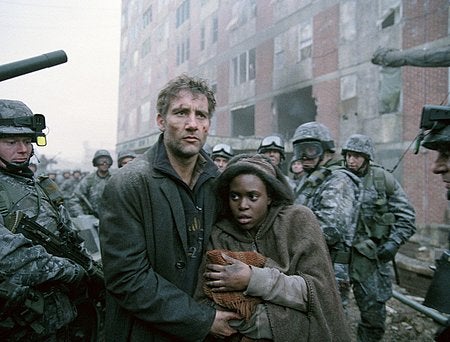 The story in Blindness – Jose Saramago’s apocalyptic “vision” as interpreted by Fernando Meirelles – is simple: Mankind is affected by sudden, inexplicable and instantly transmittable blindness. Society fractures. Some cope, and survive decently, some descend into cruelty and madness – everyone spirals into hell. (I kept thinking about Lord of the Flies.) Only one woman, the paired-back and stripped-bare Julianne Moore – who’s excellent – is able to see, and she leads her new family out from the chaos.

It took me two attempts to get into this movie. The bit I thought would be most gripping – the horror and panic as the infection spreads and the world loses its sight – was disrupted by a pac-man-esque soundtrack that was oddly up-beat and not at all brooding or ominous. It made it hard to engage. However, when I went back to the film the next morning, and essentially followed the survivor’s harrowing tales, I found it compelling.

As for locations, Saramago long resisted selling the rights to the book to Hollywood, and when he finally did so it was under the proviso that the city chosen as the location for the film would not be recognisable. Meirelles has achieved this honestly: the movie shot in Sao Paolo, in the oddly-named Guelph in Canada, in Japan and in Uruguay (hello Uruguay!). The discombobulating effect is added to by an international, polyglot cast.

There was so much hype and so many expectations raised before the launch of Ridley Scott’s Hannibal movie back in 2001, that at the time, it probably couldn’t have failed to disappoint. I don’t remember enjoying it greatly back then, but I watched it again last night, and I have to say, I got much more out of it, this time around.

The ghoulish Dr. Lecter has temporarily reinvented himself as Renaissance historian Dr. Fell, and is living in quiet disguise in Florence. Clarice Starling, now a decade on into her FBI career (and morphed from Jodie Foster into the excellent Julianne Moore) is once again put on his trail. But she’s not alone in this; Mason Verger, a fabulously wealthy creep who’d been disfigured during a previous run in with Lecter, is also tracking him down and plotting his revenge. When Clarice is publically disgraced, Lecter (who sniffs out weakness from a distance like sharks smell blood) comes back to America to taunt her, where he’s trapped in Verger’s dastardly web.

The thing that struck me with yesterday’s re-viewing of the film is that it is sumptuously shot, with imposing locations that are beautifully lit. It’s pure Ridley Scott. With complex locations from Florence, to D.C to Richmond, Virginia, producer Martha De Laurentiis is on record saying that with almost a hundred locations, it was a

“constant pain of moving and dressing sets. But the locations were beautiful. Who could complain about being allowed to shoot in Palazzo Vecchio in Florence? Or President James Madison’s farm in Montpelier or the amazing Biltmore Estate in Asheville?”

Certainly, Firenze hasn’t looked so beautiful – nor indeed so chaotic or deadly – since the stabbing scene in A Room with a View. But the other standout location is the Biltmore Estate in North Carolina. In reality it’s 16300 square metres of the largest private home in North America. Set on 32 square kilometres of farm and parkland it was built by George Washington Vanderbilt between 1888 and 1895 to replicate the great chateaux of the Loire valley. The Biltmore Estate was (astoundingly) built as a summer house for occasional use. It was of course chosen by Scott to represent the immense wealth of the hideous Mason Verger.

The question remains though, whether Mason is indeed a worse fiend than a previous cinematic resident of Biltmore: the odious Ritchie Rich.