I really am quite enjoying Revenge, the deliciously cut-throat tv series staring Madeleine Stowe (if you were wondering what had happened to her) and a frosty Emily van Camp. Set in the Hamptons, it focuses on one young woman’s ingenious, conniving and dastardly efforts to get revenge on the super-rich family of blighters who had her father framed for mass-murder. See? Fun and games. And garden parties. 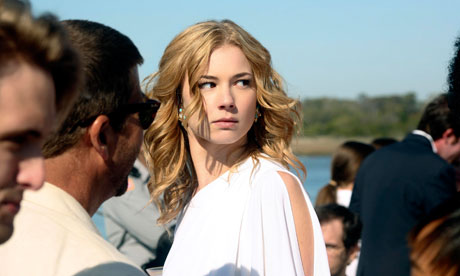 Unfortunately Revenge didn’t film in the Hamptons; the pilot actually shot just south of Wilmington, North Carolina – in Southport and Oak Island. Town rough, Jack Porter’s bar, The Stowaway was filmed at Fishy Fishy Cafe in Southport. Emily Thorne’s beachhouse is also in Southport – it was recently up for sale at a cool $1.5 million. Grayson Manor isn’t a real property; it’s entirely fabricated via photoshop using inspiration from various East Coast Houses and Architects. After the pilot though, the production decamped back to LA, in an interesting reversal of runaway production, and reconstructed the properties from scratch.

One other interesting sidebar: Revenge seems to have ignited a mini-interior design boomlet – there are now websites telling you how you can buy bits of the island style, from maps to cushions to Victoria Grayson’s chair, for yourself. Another example of the often overlooked economic spin off of film, I guess.