When young Matthew Lewis wrote the gothic novel, The Monk, in 1796, it caused quite a stir. Set in a Spanish monastery, it told the tale of virtuous Friar Ambrosio who is seduced by evil, by degrees slipping into lust, fornication, murder, incest. The French-Spanish co-pro of the book, staring Vincent Cassel, is creepy, slow and slightly sordid. Brilliant art direction admittedly – the bleached Spanish plain (it filmed in Catalonia and Andalucia) contrasts strikingly with the cool interior of the Monastery. 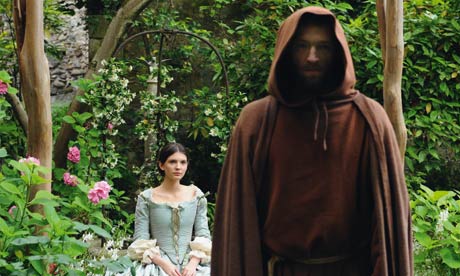 But overall? No. And here, I think, is my point: in 1796, it was scandalous to suggest that the church was full of blithe, self-centered, hypocritical rapists and evil-doers. By 2012, I think we’re kind of past that point. The movie is unsurprising and therefore dull and disappointing as a result.