Well, that was weird: a Jewish horror movie? In The Possession, a girl buys a very old wooden box in a yard sale. Unbeknownst to anyone, the box contains a dybbuk – a malevolent Hebraic demon – which is released when the bratty child opens it. Said dybbuk possesses said child, mayhem ensues: blah blah blah. OK, so it’s not an entirely terrible film – derivative certainly, obvious definitely, but it’s atmospheric enough, and (jump-the-shark moment not withstanding) it includes more than enough jumps and starts to while the night away. Not great, better than dreadful. The Possession filmed in Vancouver, with scenes filmed at the creepy, decommissioned Riverview Mental Hospital, which has appeared in just about every tv series going in the last few years.

For some reason, I really wasn’t expecting Cabin in the Woods to be anything like it turned out to be. I was expecting a group of isolated college kids to be placed in deep trouble – see The Breed or Wrong Turn or just about any other fish-out-of-water horror fayre. From the trailer, I was also actually expecting to add aliens to the mix. I really wasn’t expecting (spoiler alert from here on in….) ancient ghouls or even older gods, I certainly wasn’t expecting zombie axe murderers, or slick, manipulative, bet-placing scientists nor a world wide conspiracy to save the human race… 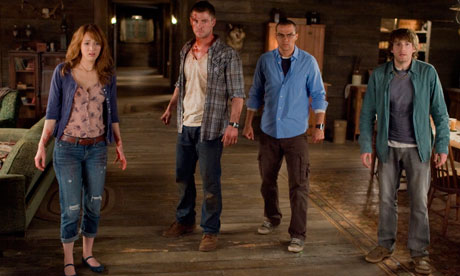 A collaboration between Joss Whedon and the writer of Cloverfield, the set up for “Cabin in the Woods” is really very good; you’re hooked immediately. The acting is above par for this kind of thing, the script is a decent balance of bejesus scares and funny, and the look-and-feel is consistently richly excellent. Unfortunately though, I found it devolved into something a little silly, and it lost me entirely towards the end. The only location info I can find is that some scenes shot at the Aerospace Campus of the British Columbia Institute of Technology in Vancouver. Verdict: Entertaining enough but no cigar.

The Rise of the Planet of the Apes is a glossy re-imagining of how the world of the seventies Sci-Fi tv series – where talking chimps rule the world and humans are dumb slave labor – comes about. This time, a crumply scientist (James Franco) tries to cure Alzheimers and creates a brain potion that’s tested on chimps in a slick, impersonal animal testing facility. This new potion heals chimps with damaged brains, but does even more remarkable stuff to apes with healthy brains, advancing their intelligence and reasoning exponentially. And when one of the test subjects begins to object to his cruel and unusual treatment at the hands of impersonal scientists and sadistic welfare workers alike, it’s the dramatic turning point in simian-human relations….

The film is set in San Franscisco, and several city landmarks, notably the zoo and the Golden Gate Bridge, are front-and-center visual icons in the film. However, the film mostly filmed in Canada – the domed roof of the chimp rehabilitation facility is actually the Pacific National Exhibition Center sports facility.

But is it any good? Well, yes, actually – it’s compelling and entertaining and engaging, mostly due to the efforts of CGI-enhanced performance of Andy Serkis as Caesar the chimp. Rise in fact pulls off quite a remarkable feat; for the first time I can ever remember, the movie concludes at the threshold of the humiliation of vicious, kak-handedly brutal and thoughtless mankind, and it feels completely right and proper to celebrate the end of the world as we know it. Having created such sympathy for Caesar, it will be interesting to see how future films (and believe me, there will be more films) turn these apes into the human-like monsters of the original series.

There are many, many, many things unwatchable about Zack Snyder’s Watchmen, so I shall name just four: Malin Ackerman’s moonface. Patrick Wilson’s chins. Matthew Goode (all of him), Billy Crudup’s blue penis. Off putting. When the Moonface and the Chins have disturbing close-up sex in a floating capsule, I was ready to break things.

There’s a nice premise in there somewhere – it’s 1985 and Trickie Dickie Nixon is still President of the USofA, and in a crack-down on crime, he has banned masked vigilantes. He’s also taken the world to the brink of nuclear war with the Soviets. But it goes nowhere. Slowly. The attention to artistic detail in each shot is magnificent and apparently it sticks pretty closely to the vibe if not the plot of the original graphic novel. However, I find that I don’t care. Watchmen is three hours of my life that I won’t get back.

It shot on a sound stage in Vancouver. Mars and the Antarctic were green screened.

……And I wanted to see a really good movie. So we’re both disappointed, then.

The latest X-Files movie feels like a really long tv episode. Duchovny and Anderson are great as usual, but the plot is leaden and, aside from a couple of genuinely creepy moments, it is rather lacking in suspense. I guess icky Russian scientists with hard-ons for internal organs can’t generate the same level of conspiracy hysteria for which the TV series was so famed. Ah well.

The movie is set in wintry West Virginia but was filmed in British Columbia in Canada (including the old mining town of Pemberton, population 2912 – which the writer had in mind as a location when developping the script) It’s therefore an apt return to the Canadian roots of the original tv series. Frackin’ cold out there though.

There were titters and guffaws in the Capetonian audience watching The Day the Earth Stood Still when it realised that an interstellar body with enough speed and size to anihilate the entire planet was heading for a direct impact with Manhattan Island. All 23 square miles of it. So here’s another little tip for Hollywood’s cognoscienti; out here in the Rest of the World plc – where, incidentally, we make up more than a fraction of the revenues your product will score over the course its lifetime – we’re actually a little bored of seeing New York or Los Angeles getting blasted. It’s been done. To death.

Anyway. Fortunately – and without giving away too much of the plot – this particular incident is not at all happenstance. Aliens are coming, and they have a specific purpose; they want to save the dying Earth. END_OF_DOCUMENT_TOKEN_TO_BE_REPLACED

88 Minutes is about a serial killer put away on the evidence of a celebrity psychiatrist. Said killer may be innocent OR he may be trying to frame the good doctor before he’s executed. There’s a death threat in there too, somewhere. So let’s start by saying “It’s an Al Pacino film.” In alternative universes “It’s an Al Pacino film” still suggests a degree of cachet – which is probably how the all(most)-star cast were persuaded to get involved with this mess in the first place. In 88 Minutes, LeeLee Sobieski, Sybil’s Red-headed Daughter, (Judging) Amy Brenneman, Neal McDonough and Deborah Kara Unger sadly flare and die in a plot that turns more poorly executed circles than an episode of “So You Think You Can Dance?”. They’re all significantly taller than Pacino too – which has apparently been dealt with by giving his hair a life of its own – it rises and falls at will and without reason. (No, continuity is not this film’s strong point.) And if you’re expecting a real-time, 24-esque, race-for-the-finish-line, you will be disappointed. Quite bitterly in fact. It’s 106 minutes long in fact; enough said? What else? 88 Minutes is set in Seattle but it’s filmed in Vancouver, so it rains. A lot.

Honestly? I gave up and went to bed.