After all the pre-Oscar hype and the depressing Post-Oscar Jesse James fiasco, I finally got to see The Blind Side, on the Dubai-Cape Town flight back from Locations Trade Show. It wasn’t that I’d been avoiding the film, although the strong religious slant that saw it widely re-purposed for Church Sermons maybe made me a tad hesitant. It was more that I’m not at all interested in American Football. or Baseball. Or Nascar. Or any other American sport, if I’m honest. But in LA I’d had lunch with a charming lady from Alcon Entertainment, and with 10 hours to kill, I thought I’d give it a stab. 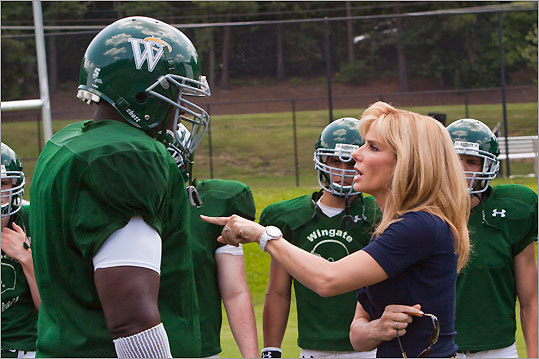 And what of it? Well I don’t mean to be damning with faint praise, but The Blind Side is indeed a nice enough film. There’s a good message (it really is better to give than to receive) and sweet outcomes and I really liked the fact that there was no obvious villain beyond society’s rather limited scope and expectations. It’s less about faith and football, and more about family. In truth it felt more like a really good Hallmark Channel movie than an Oscar contending super-pic, but with better production values and a star turn from Ms. Bullock. (having clearly taken good cogniscence of my production notes on ditching romantic lead roles, her performance as a Southern Mom is feisty and surprisingly nuanced.)

In spite of the strong Memphis, Tennessee story line, The Blind Side filmed in Georgia – with a good chunk of change for the film coming from the State’s aggressive incentive program. Interiors and some of the football field action was filmed at the International School, and The Westminster Schools in Atlanta, and with the film’s main Briarcrest Christian School location being played by the imposing Agnes Scott College, which is actually a girls school and therefore probably doesn’t prioritise football so much.